Give what you can, take what you need – how container donations are supporting street pantries in Ngunnawal 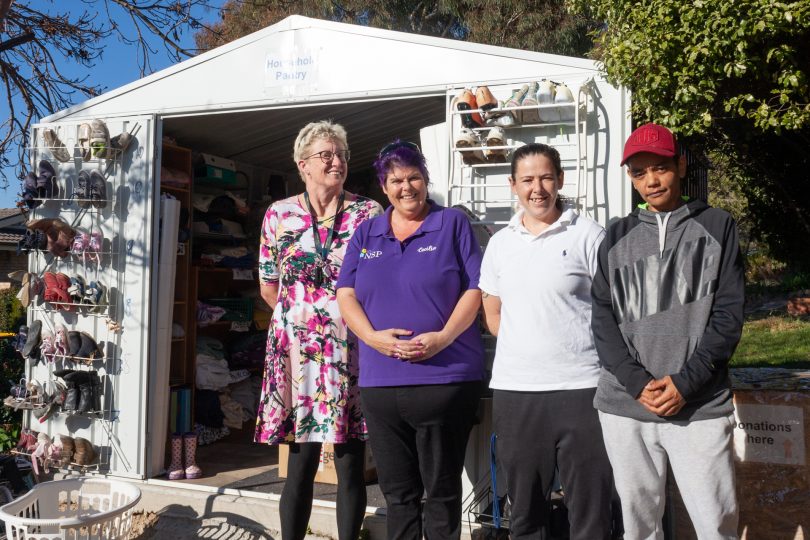 Two years ago Margaret McGrath decided that since she and her husband Paul were living comfortably, she would do something to help people who didn’t have enough.

She set up a street pantry outside the couple’s Ngunnawal home, with the philosophy that people should take what they need and give when they could.

Paul says that since then Ngunnawal Street Pantries (NSP) has “grown into something quite massive” as more people have become involved and more pantries established. Working with other volunteers and charities, he and Margaret have established nine street pantries in four locations catering to different needs. There are pantries for clothes, household goods, children’s toys, women’s and babies’ needs, including toiletries, and more.

They have a big focus on supporting domestic violence survivors and homeless people, and now work with TIMBA (This Is My Brave Australia), a charity that aims to reduce stigma and discrimination associated with mental health.

“People in need can have varying mental health so there is a natural link between TIMBA and NSP,” says Paul.

Recently Paul and Margaret decided to add container recycling to their endeavours as a way to bring in funds. “It helps buy those incidental things that don’t get donated,” says Paul. “Such as $10 Coles gift cards for petrol or food, or to buy fresh food for the pantries, or sometimes items for the ladies’ pantry.”

“In May we set up the wheelie bin out the front of our place, where people can donate their containers for us to then return via ACT CDS. We’ve raised maybe $1,000 to $1,500 through container refunds so far from the street pantry – the back of the car has been filled several times over.”

Paul says the pantries also “cater for the ‘working poor’ and ‘in-betweeners’ – people who are not on benefits, but are doing it hard and may occasionally need help”.

“We see the food pantry as for immediate crisis and the other pantries as preventative,” says Paul. “When people who are struggling can access clothes, toys, and household items, it means they can avoid being driven to crisis point by these expenses.”

Paul adds that they work hard to ensure the pantries are inclusive and friendly, so everyone feels welcome. “Trans people have told me the clothes pantry is really useful because the costs of new clothes add up and they can face judgement in shops, so instead they can just come here and choose what they like.”

Eligible bottles and cans for recycling through the ACT CDS can be taken to 22 Bullala Court, Ngunnawal. Donations for the other street pantries can also be dropped there.

Find out how community fundraising works with the ACT CDS and download the fundraising toolkit.