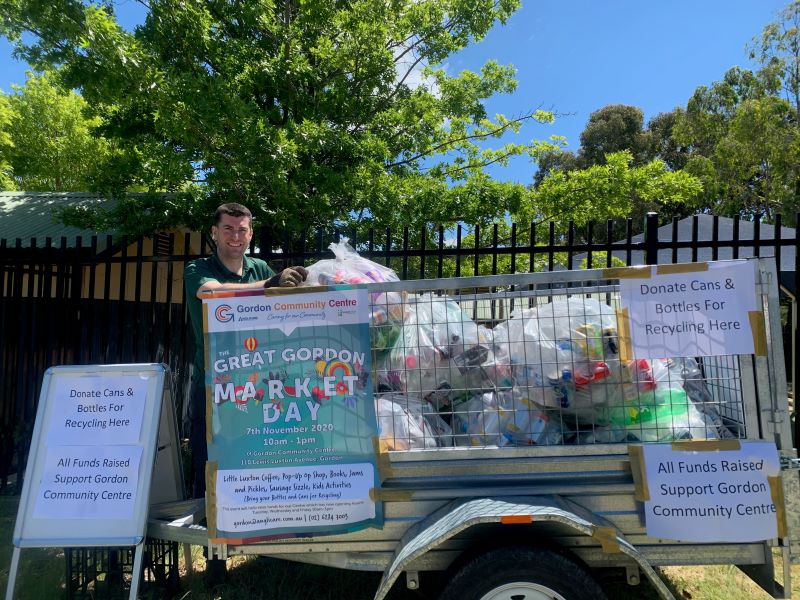 The Community Centre is a not-for-profit partnership between Anglicare and Lanyon Valley Anglican Church. It began as a food pantry for those in crisis, and has expanded to encompass a range of other services, including assisted playgroups and programs to support people in challenging situations.

Volunteer Michael West says the Centre recently ran a market day as a fundraiser, and on the day they encouraged people to bring empty cans and bottles to donate.

“Some people dropped in one or two bottles, others arrived with several boxes of containers,” says Michael. “It’s a fantastic fundraising opportunity as it helps the environment as well as engaging the community in making a contribution. Everyone can get involved, even kids, and families who struggle themselves, can bring containers along.”

Funds raised from the container refunds went straight into running the Centre.

“Over the Christmas period demand for our services increased, especially for the food pantry,” says Michael. “2020 was a hard year for a lot of people – we still have 10 or more people needing emergency food every day at the moment.”

The Centre also ran a ‘Christmas Cave’ during December so parents who were struggling could choose a gift for their children.

After the success of its first fundraising effort using the container deposit scheme, the Gordon Community Centre plans to collect cans and bottles again at its next market day and encourages people to start saving them up to donate then.

In the meantime, Michael says donations of nonperishable grocery items are very welcome and can be dropped off on Tuesdays, Wednesdays and Fridays between 10am and 3pm.

The ACT Container Deposit Scheme has recently launched a Fundraising ToolKit for charities, which includes digital assets and guidance for groups on how to get the best results from using container returns for fundraising. It can be accessed on this website.