Passionate recycler finds dream job with Return-It, thanks to Employ for Ability 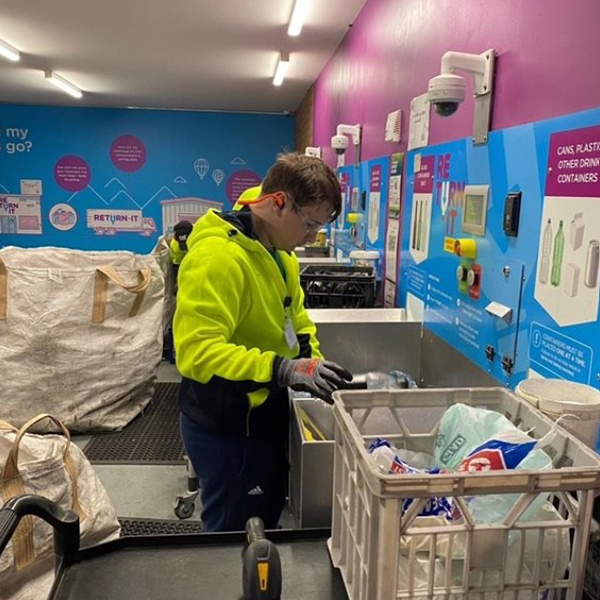 Darcy Wilson has been interested in recycling since he visited the Materials Recovery Facility at Hume when he was six years old. He knows all about garbage trucks and has spent many years sorting his neighbours recycling and putting their bins out.

When Darcy was 20, he met Martina Johnson, Senior Autism Consultant from Employ for Ability – an organisation that works to help people achieve their employment goals. Darcy is neurodivergent so despite being extremely capable, he had faced barriers to employment, having had supported work experience jobs, but not an independent, paid role.

On a professional development course, Martina met a Senior Director at ACT NoWaste and mentioned Darcy, his passion for recycling and raised the possibility of gaining on-the-job experience. They identified that Return-It, the network operator for the ACT Container Deposit Scheme, could be a great fit. From there, Martina met with the Return-It team to see how it might work, and to make sure they understood Darcy’s interests, abilities and challenges.

Job interviews are not a good measure of ability when people are neurodiverse or have social anxiety,” says Martina. “We prefer to negotiate trial shifts, and Return-It agreed to that.”

When Darcy began work in July 2021, he initially had a job coach with him for the whole time, but that quickly went down to one hour per shift, and soon that will reduce even more.

“He is doing fantastically,” Martina says. “He’s already working independently in express processing. On the second shift he absolutely nailed it.”

And, importantly, Martina says Darcy is pleased with the role. “He loves every aspect of the job, there’s never a complaint. He thinks it’s the best job in the world and he works really hard,” says Martina. “He loves that feeling of independence and being an adult with pay coming in.”

Martina emphasises that it has been a really positive experience for everyone, not just Darcy. “Return-It gets some really good benefits, neurodivergent staff tend to be incredibly loyal – retention rates are over 90 percent. If the job is aligned with their area of interest, they can see outside the box and be incredibly innovative,” she says.

Find out more about how to participate in the ACT CDS. Read more about the work Employ for Ability do here.