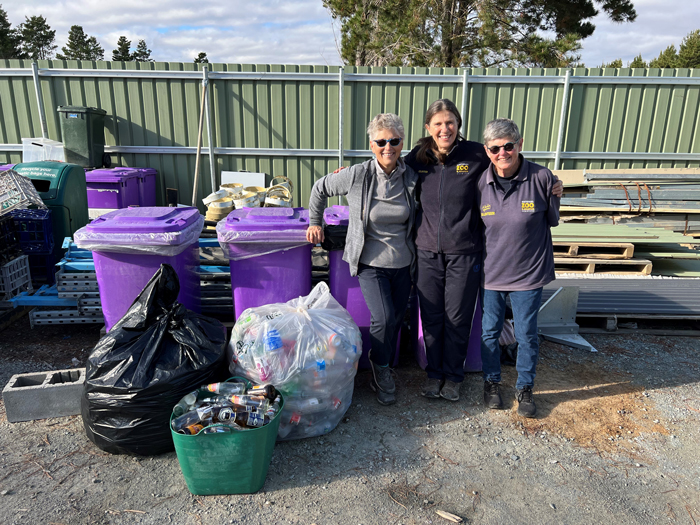 Sue Fallon is a well-known and passionate advocate for animal conservation who has been a volunteer at the National Zoo and Aquarium in Canberra for over 13 years. Sue is also dedicated to sustainability and recycling which is demonstrated by her efforts to divert tens of thousands of drink containers from landfill every year.

When the ACT Container Deposit Scheme (CDS) launched in 2018, Sue immediately started collecting eligible drink containers at the Zoo to raise funds for animal conservation and to benefit the environment.

“Saving valuable resources from landfill and returning them through the ACT Container Deposit Scheme for the refund was an absolute no-brainer for me,” said Sue.

“Once collections were set up across the Zoo grounds, visitors, volunteers, and staff were keen to get involved, especially the all the keepers. It’s become such a community effort and the containers have really added up.”

The team has recycled around 440,000 containers, raising an incredible $44,000. They are now close to reaching their milestone of returning 500,000 containers by August, with the $50,000 raised in container refunds to be donated to for animal conservation initiatives such as Mulligans Flat Woodland Sanctuary and emergency relief funds.

The Zoo’s recycling efforts are now back in full swing after a lull during COVID-19. Six dedicated purple container collection bins are located across the grounds of the Zoo.

For the first couple of years, Sue single-handedly collected the containers and returned them to the Belconnen cash-back depot with the help of her husband. Now with three more volunteers, Ann, Liz and Lee on board to sort and collect, the task is even easier.

“We like to call ourselves the dumpster divas, belles of the bottles or goddesses of the garbage,” said Sue.

“We personally sort through all the Zoo’s bins to make sure every eligible container is collected and that the recycling bins are free from contamination.”

Although it’s time-consuming to sort and return the containers, the positive impact on the environment and refund for each container makes it worthwhile for Sue and her small team of helpers.

“Once you get going, it’s so simple and every bottle counts. Otherwise, it’s literally throwing money in the bin, not to mention into landfill” said Sue.

Visitors are encouraged to help the team reach their fundraising goal by using the purple bins to donate their eligible bottles, cans and poppers.

Interested in fundraising through ACT CDS like the National Zoo and Aquarium? Find out more on our Fundraising page.