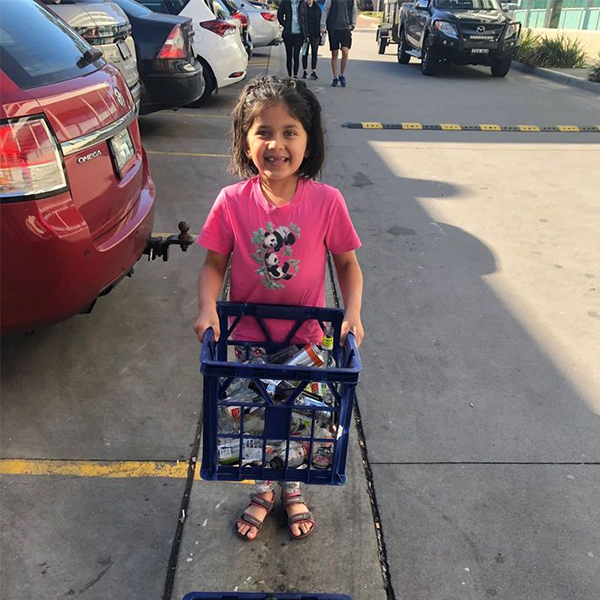 Six-and-a-half-year-old Arushi Natu has been busy this year collecting bottles and cans to fundraise for two important causes using the ACT Container Deposit Scheme (ACT CDS) – supporting efforts to combat COVID-19 in India and helping to build a Hindu temple.

“Australia has lots of oxygen and India needs oxygen,” explains Arushi, adding that funds are also needed for the temple “so that kids from India can go to the temple and also play there”.

Arushi collects containers she finds littered in Canberra, and has asked her neighbours to save containers for her. “I wrote so many letters to my neighbours, it was my best writing,” she says.

Although only in Year One, since April this year Arushi has returned 2,205 bottles and cans to the Return-It Cash-back Depot at Phillip, a return point of the ACT CDS. In doing so she has raised $220.50.

The money she puts towards assisting the COVID-19 response goes to a fundraiser organised by her father, Ambarish, to supply medical equipment such as oxygen concentrators and ventilators to India. Funds for the temple will go to the construction of the planned Canberra Hindu Mandir (Temple) in Moncrieff.

Ambarish says, “Arushi wishes to contribute whatever little or big amount she can for this effort. She has been applauded for this by the entire community.”

He adds that Arushi’s little sister Avni, 3, helps out with what she can too.

Arushi says she is happy to know she is helping keep the streets clean by collecting littered containers when she goes for walks and bike rides with her dad. “It’s not very nice to have rubbish on the road, [but] I am good at spotting it,” she says.

To help Arushi and Avni fundraise for their charities, use the code E028913 to donate some or all of your container refund when you’re next returning eligible containers with the ACT CDS. To find your nearest ACT CDS return point go to Return Points – ACT Container Deposit Scheme.