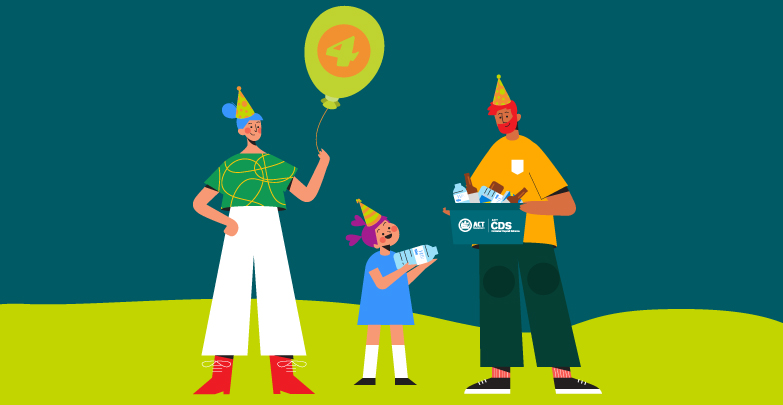 The ACT Container Deposit Scheme (CDS) is marking its fourth birthday by celebrating the tremendous effort of the ACT community which has seen more than 181 million containers returned through the scheme’s network of return points and over $18 million in refunds back in the hands of the community.

This Saturday 2 July 2022, Canberrans can enjoy a free coffee and cookie when they return their containers at any ACT CDS cash-back depot between 9am and 11am (while stocks last).

A new scheme performance dashboard is also now live on the ACT CDS website, providing the public with the latest scheme success metrics including number of containers returned to date, redemption rate and participation.

Currently, 3 in every 4 containers supplied into ACT are being redeemed through the scheme for recycling, including containers returned through one of the 19 return points across the Territory as well as containers collected via resident’s yellow kerbside recycling bins.

“In four years, the ACT Container Deposit Scheme has become a part of life for the majority of ACT residents with 63% of adults participating, resulting in millions of bottles and cans being recycled and avoiding ending up as litter or landfill,” said Danielle Smalley, CEO of Exchange for Change.

The ACT Container Deposit Scheme is a partnership between the ACT Government, scheme coordinator Exchange for Change and network operator Return-It.

“What’s been really heartening to see alongside the environmental outcomes is the social benefits, with the scheme become a fundraising stalwart for many ACT charities, schools and community organisations,” said Marc Churchin, CEO of Return-It.

The National Zoo and Aquarium began participating shortly after the scheme launched in 2018. Thanks to its group of volunteers coordinating the container collections, it has almost reached its target of $50,000 in refunds for animal conservation initiatives.

There are 19 return points available across the ACT including cash-back depots in Fyshwick, Mitchell, Phillip and Belconnen.

For more information about the ACT Container Deposit Scheme, including your nearest return point, visit www.actcds.com.au.